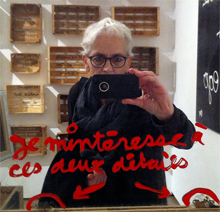 Since the early ’80s makes trips to Europe, Asia (including India) and America. She began to exhibit in 1985.
For the book “Il Ticino e i suoi fotografi” (Ticino and its Photographers) the Swiss Foundation of Photography in the year 1987 chose a report, realized on one of her journeys through India, entitled Rito di cremazione (Crematory ritual).
1991 the Swiss Italian TV station dedicated her the film report “ritratto di una fotografa” (portrait of a photographer).
Thanks to the scholarship awarded by Visarte, the year 1994 leads her to stay for six months at the Cité Internationale des Arts of Paris: out of this experience, in 1997 results the publication of Paris noir (for the edition of the magazine Pagine d’arte, Lugano-Milano).
1995 she got the first prize in a photography competition organised by the Società Ticinese di Belle Arti (Society of the fine art, Ticino).
1997 the Foundation Galleria Gottardo, Lugano, realizes an interesting initiative giving out a mandate to the European photographers to document the Gotthard. Stefania Beretta created suggestive images entitled “Sud-Nord”. The initiative will be the subject of a touring exhibition accompanied by an important catalogue with the title Il San Gottardo.
1998 she got invited at the Cultural Center Europos Parkas of Vilnius (Lithuania) to accomplish a personal work of her. In the same year, she received a national scholarship from the Foundation Gleyre (Switzerland).
Since 1980 she frequently travels through Europe, Asia and the Americas; Città d’Europa (Cities of Europe) edited 1998 by CGA&P Lugano, contains a lot of images of these journeys which show her way of being.
2000 the publishing house Trans Photographic Press Paris published her book rooms, a work successively exposed at different European galleries. 2002 the same house published the book Trop (too much) and 2006 the book In Memoriam.
Since 2001 she works on the project The Rolex Mentor & Protégé Arts Initiative commissioned by Rolex, following and documenting the encounters of some of the most important contemporary artists and young talents of the world.

2004 SRG SSR Idée Suisse (Swiss Broadcasting Company) realizes PhotoSuisse in cooperation with the Swiss Foundation of Photography and the editor Lars Müller; it is a movie-portrait with an important publication of 28 Swiss photographers which transforms itself in collaboration with the Pro Helvetia Foundation into a travelling exhibition.
From her frequent journeys through India arises a small but precious publication called Indiarasoterra, realized at the occasion of the exhibition of the gallery Cons Arc in Chiasso.
2005 she got a scholarship from the Foundation Landis&Gyr of Zug for a stay of six month at the studio in London.
2006 on invitation of the Credito Valtellinese Foundation and the agency Grazia Neri, she photographs the marble quarries in Sicily and Marco Anelli (photographer of Rome) the quarries in Valtellina. The work entitled Cave (quarries), will be shown in a travelling exhibition and a book will be published also.
The Bogliasco Foundation, the Liguria Study Center for the Arts and Humanities Genoa, grants one month Fellowships to Stefania Beretta during the semester autumn-winter 2009.
In 2010 on invitation of Foundation Credito Valtellinese Sondrio, she realizes somes images on the theme of the Rhaetian Railways to a publication accompanied by a tourning exhibition with the photographers Margherita Spiluttini e Francesco Cito.
2011 on invitation of the Credito Valtellinese Foundation produces images on the theme of Rhaetian Railway for a publication accompanied by a traveling exhibition.
In 2011 she was invited to exhibit with internationally renowned photographers in the exhibition Eyes on Paris at the Deichtorhallen in Hamburg.
The same exhibition in 2015 is on display at the Kunstmuseum Pablo Picasso Münster.
In 2016 the Municipal Art Museum of Ascona dedicated a solo exhibition entitled Una segnaletica dell’Essere.

Since 1985 she is regularly exhibiting her works in Switzerland as well as in the rest of Europe. Her photographs are now part of many public (e.g. Paris Bibliotheque Nationale in Paris, the Swiss Photography Foundation) and private collections.

She lives in Verscio (Switzerland).